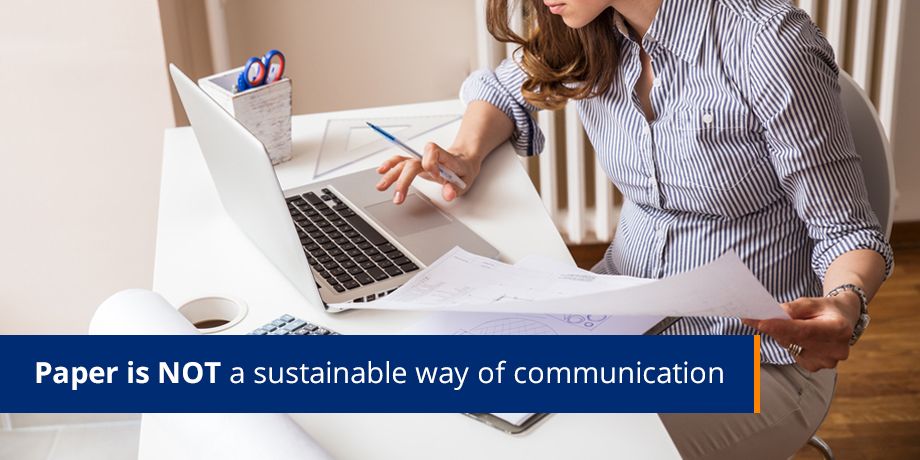 eBilling is “green” – everyone knows this. It’s a truism so obvious and self-evident that it is hardly worth mentioning. So, for eBilling to be attacked as ‘greenwashing’ seems disingenuous to say the least, especially coming from a lobbyist bought and paid for by the very industry suffering from eBilling’s success.

Recently “Two Sides” (a lobbying initiative by companies in forestry, pulp, paper, inks and chemicals, pre press, press, finishing, publishing and printing) started beating their drum about the “Greenwashing of eBilling”. They maintain that in the UK 45% of major banks, 70% of telecoms, and 30% of utilities risk greenwash sanctions for claiming that eBilling was “green” without verifiable proof.

The issue that upsets them so much is that the banks, telcos and utilities are enjoying substantial cost reductions from moving to electronic billing and therefore can’t claim to be doing it for altruistic environmental reasons like saving the planet and lowering Co2 emissions.

And they are particularly upset because their bankrollers are seeing revenue decline as customers choose to “Go Green” by going paperless. It seems to be a fairly self-serving argument – but I guess that’s their job.

It is interesting that Two Sides are not disputing that eBilling is more cost-effective – but they are harping on the technicalities that the organizations making the claims have not done the “verifiable research” to back-up the “green” claims and therefore could be “contravening the latest CAP code (Committee for Advertising Practice) which states that environmental “claims must be supported by a high level of substantiation”.

Of course, to some people, it may not seem that obvious that an email is going to result in fewer pollutants than a piece of paper. There are no trees to cut down, no effluent wastewater and no solid waste in the production of emails.

Two Sides point out that the data centers are needed to host and run the eBilling processes consume vast amounts of power but interestingly enough they don’t provide any verifiable research to back this up. Common sense would dictate that the power consumption is not a significant factor in comparing the “green” credentials of eBilling vs. paper & print as similar servers would be used in both process, except in the case of eBilling there are no massive printers to run and no network of delivery trucks to distribute the documents – eBilling uses a tiny piece of an existing network (the internet) and such a small proportion of the end-users computer power as to be statistically negligible.

Two Sides goes onto say that “Print Media… being based upon a renewable and recyclable material, maybe the sustainable way to communicate.”

What a load of Hogwash!

Just because trees are a renewable resource doesn’t mean that paper is a sustainable way to communicate. This is so self-serving it stinks more than the sulphuric smell that pervades pulping plants.

Unfortunately for Two Sides, the cat is well and truly out the bag on this one. eBilling saves costs as it turns off paper. Market forces will dictate that businesses drive down costs and eBilling is a prime opportunity to do that. If this means that the bankrollers of Two Sides feel the pinch – that’s just normal business – there’s no use whining about it.

As for the ‘verifiable research’ you only have to visit www.papercalculator.org to work out the environmental benefits from switching from paper to email. In addition, here are a few links that provide more information and proof that paper is a messy business: